Eczema-Ltd III, is an elegant, smooth application with no messy, smelly creams that stain your clothes or bed linen.

Treating Atopic Eczema is very easy after figuring which type of allergen that the patient may be affected by which we will help with further below. Once the allergen is figured out, the treatment and healing process very simple.

Some common allergens include chemicals, pet dander, seasonal allergies and many more.

Atopic eczema most often occurs when the body produces too much antibodies which are thought to help defend the skin. Allergic rhinitis, asthma and eczema are all atopic reactions. The antibodies cause a reaction of the skin with the symptoms of red, itchy skin that is sometimes inflamed. Some allergens causing the over activity of antibodies are due to pollen, chemicals, drinks, food and dust. Isolation from these allergens is the key to the quickest improvement. Change rooms or stay as far away from the allergen as possible. Some people can prove this when they visit others and stay in a different home environment. Or conversely have and allergic reaction to someone's home but are much improved in their own home.

Food and drink allergies can be improved by choosing healthier options in foods and drinks. You may try a body 'tune up' by consuming only simple fresh vegetables or frozen vegetables and drinking only water. Avoiding glutens, fast foods, soft drinks and alcoholic drinks could prove to be very beneficial in a short period of time at no extra cost. Try to keep a food and drink chart to see if you have an allergic reaction within 2 to 3 hours after consuming various foods or drinks. Yet it may take several days for the foods or drinks to affect your eczema, but it is a good start to stay on the fresh vegetable and water diet for several weeks with much to be gained.

In the past, it was thought that atopic eczema was caused by an emotional disorder. However, we now know that while emotional factors such as stress can exacerbate the condition, but they do not cause it.

Atopic eczema appears to result from a combination of hereditary and environmental factors. Research indicates that the disease is associated with other so-called atopic disorders such as hay fever and asthma, which many people with atopic eczema also have. In addition, many children who outgrow the symptoms of atopic eczema go on to develop hay fever or asthma. Although one disorder does not cause another, they may be related, thereby giving researchers clues to understanding atopic eczema.

Trigger factors for atopic eczema may include soap, harsh chemicals, heat and humidity, stress, certain foods (most common offenders include eggs, milk, wheat, soy protein, and peanut). Many of these ingredients can turn up in unusual places, such as all-natural soaps, makeup, creams, or lotions. Inhalant allergens such as house dust mites, pets, pollen, and cut grass are also triggers that can cause eczema. Atopic eczema is normally associated with a family history of asthma or allergic rhinitis accompanied by chronic or recurrent dry, extremely itchy, inflamed lesions.

Atopic eczema, the most common form of eczema, affects an estimated 15 million people in the USA. It manifests itself as an inflammation of the skin, which tends to flare-up from time to time, usually starting in early childhood. Typical skin symptoms include dryness, thickening, and even scarring. There is no 'cure', but treatment will usually control or ease symptoms. The predisposition for atopic eczema is an inherited condition that is usually triggered by an allergic reaction. This chronic condition is not contagious and often begins in infancy as a rash on the scalp, face, or upper extremities of the baby. Atopic eczema is most commonly located in areas where the body bends or experiences contact thus creating friction that can cause eczema.

The term 'atopic' describes the tendency of a person to react to allergens. Atopic eczema is more than just an allergic reaction. Atopic eczema sufferers have shown an increased predisposition for hay fever and asthma. 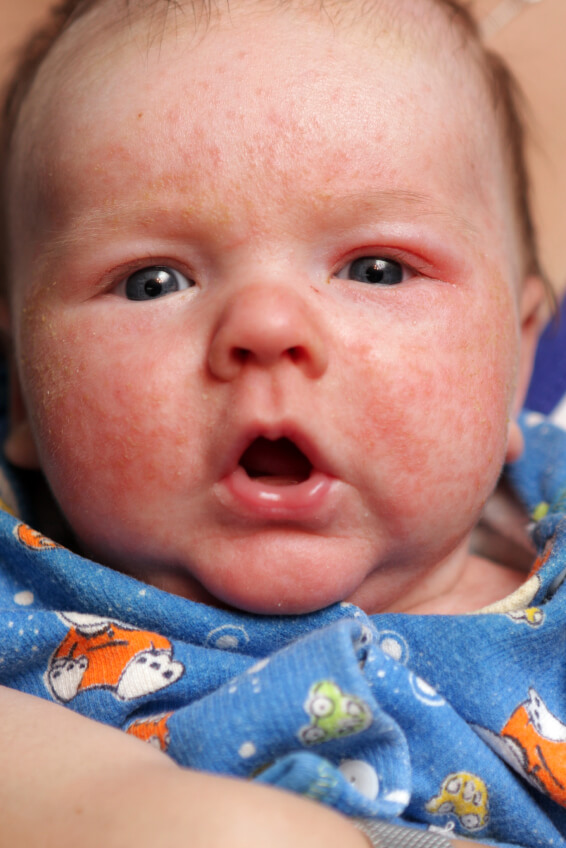 The symptoms of Atopic eczema in terms of severity and initial onset of the symptoms are quite varied. In Infantile atopic eczema, the symptoms first appear somewhere between six to twelve weeks after birth. The initial symptoms may include a pinkish patchy facial rash encompassing the cheeks and chin. It may progress to a bright red color with scaling, peeling or oozing skin, which may become infected. As the child becomes more mobile and active, the condition may spread to include the exposed areas of skin on the elbows and knees. The itching and discomfort can cause irritability and restlessness in the infant. Improvement is usually noted by one and half years of age, although the child will possess a greater than normal risk of having hand eczema or dry skin as they age.

Children begin to have atopic eczema on the inside of their elbows and behind the knees where the skin folds or crevices are, but also children can have the symptoms to appear on the hands, ankles or wrists. The early symptoms are a red rash and sometimes with papules that become hard and when scratched often, scales can appear.

For a variety of reasons, atopic eczema goes through periods of flares and remissions of the condition. One generally does not display symptoms continuously. For some people, their skin may always be sensitive and easily irritated and very dry but beyond that their eczema may be in a state of permanent remission. It could be that these are the people who learn to manage and control their triggers best and thus maintain the symptoms at a minimum. Stress, hormone changes and environmental factors can all cause to flare at any time. 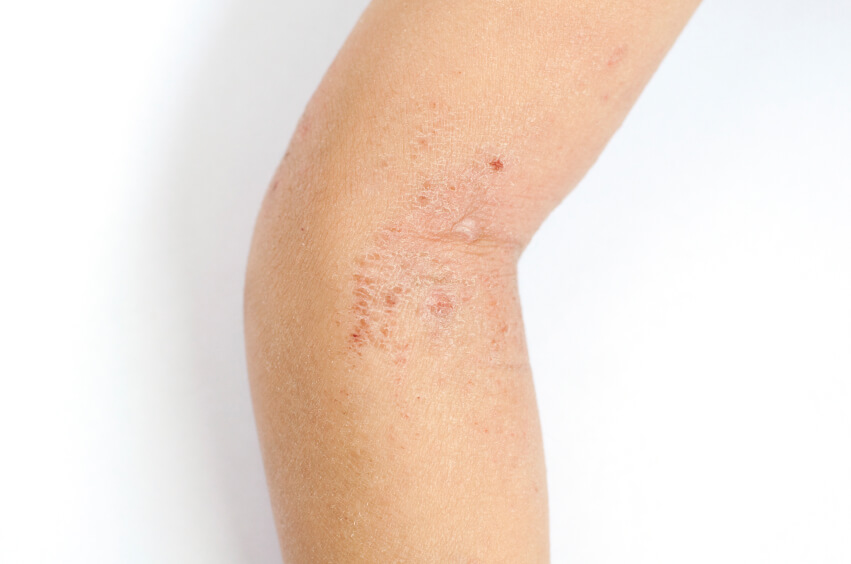 Although a number of people who developed atopic eczema as children also experience symptoms as adults, it is unusual (but possible) for this skin condition to show up first in adulthood. Some atopic eczema patients may have the same atopic eczema symptoms later as adults and with the very same symptoms. Stress at work or home as well as lack of sleep or not enough relaxation may be a cause for atopic eczema.

Atopic eczema affects males and females equally and accounts for 10 to 20% of all referrals to dermatologists. It is estimated that 65 percent of patients develop symptoms in the first year of life, and 90 percent develop symptoms before the age of 5. Onset after age 30 is less common and often occurs after exposure of the skin to harsh conditions. People who live in urban areas and in climates with low humidity seem to be at an increased risk for developing atopic dermatitis.

Next Page: Symptoms of Atopic Eczema