Eczema-Ltd III has been sold to many parents with children with baby eczema. The results are very fast and are non-irritating to babies.

Baby Eczema, also known as infantile seborrheic eczema or more commonly cradle cap, is a common condition affecting babies less than one year old. The exact cause of this disease is unknown. It usually starts on the scalp or the diaper area and quickly spreads. Although this type of eczema looks unpleasant, it is not sore or itchy and does not cause the baby to feel uncomfortable or unwell. Normally this type of eczema will clear in just a few months.

Many children suffer from infantile or atopic eczema, which is a common form of eczema that won't stop itching. Infantile eczema is characterized by periods without symptoms followed by further outbreaks of differing severity.

Children who suffer from infantile eczema tend to have drier skin than other children. They also have a high sensitivity to itching, combined with an increased risk of developing other atopic illnesses - asthma, hay fever and allergies. Most children outgrow their infantile eczema while others may continue to suffer from the condition more or less for the rest of their lives. It is not known what causes the disease, but for three quarters of sufferers infantile eczema, asthma, or hay fever run in the family. It is also common for children with the disease to suffer from asthmatic bronchitis, asthma, hay fever, or some other kind of allergic illness.

Atopic eczema usually becomes apparent before the child reaches the age of five, and most frequently appears when the child is between two and six months old. 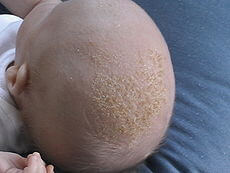 Babies with infantile eczema tend to develop an itchy red rash on their cheeks. This spreads over the face, down the neck to the diaper area, and may also appear on the arms and legs. Because of the itching, the child may seem upset, fussy, or irritable, particularly at night or when they are tired.

The rash is normally dry, but if the skin becomes infected with bacteria the eczema will begin to produce pus. This is a danger signal, and you would be advised to consult your child's doctor if this occurs.

When the child is one-and-a-half to two-years old, atopic eczema may follow a more typical pattern, with the rash appearing behind the knees and in the bends of the arms, wrists, ankles, and neck.

In adults, the typical symptoms are a variant of the pattern found in children. The eczema, dry on a base of thickened skin, normally appears on the torso and is often infected with skin bacteria.

A lot of people who suffer from an inherited tendency to develop allergies also show signs of so-called atopic stigmata: darkness around the eyes and a double furrow beneath them, cracks near the ear lobes and itchiness when wearing woolen clothing or fabrics containing some polyesters or polyester blends.

The goals for the effective treatment of infantile eczema is to try and avoid the triggers that start the rash and to keep the skin moisturized to help soothe the itching and the inflammation. Listed below are some suggestions for avoiding common triggers:

*NOTE: When choosing baby oil, it is best to choose one made from natural oils such as Jojoba oil (found in GNC or natural health store) or Safflower oil (found in many grocery stores). Many commonly available baby oils are made from liquid paraffin, which is a derivative of crude oil. Recent critical claims by various manufacturers and authorities have seen a decline in the use of paraffin in cosmetics.

Cradle cap appears as thick, crusty, yellow or brown scales over the child's scalp. Also scales may also appear around the nose, as well as the eyelids, groin and on the ears. Cradle cap can appear on any age child from new born to a toddler. Normally, cradle cap is harmless unless an infection begins at which time you should contact your pediatrician. 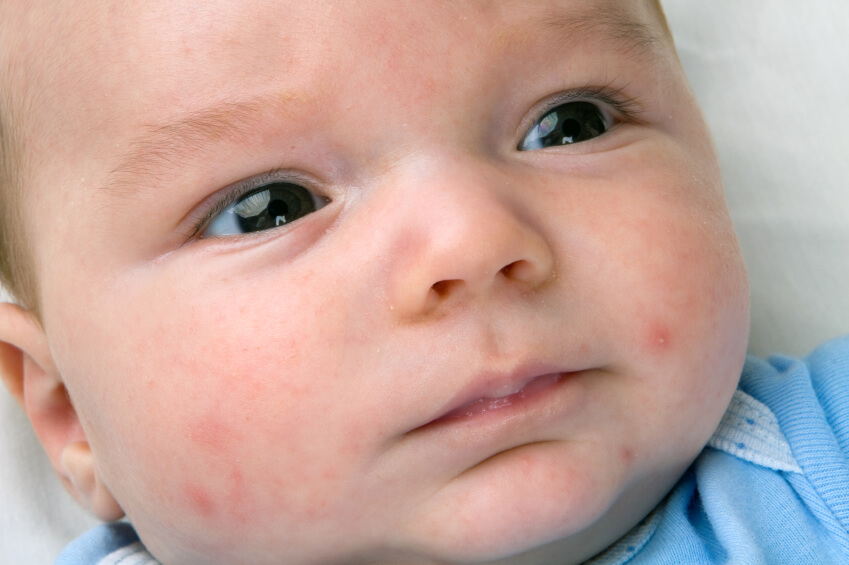 More than 30 percent of babies are born with, or more commonly, develop a rash soon after birth. There are various types of rashes, baby acne being one form. It tends to occur at about the same age as the baby's peak gas production and fussiness. These bumps are quickly fleeting evidence of the connection between the mother's body and the child. During the final moments of the pregnancy, the mother's hormones crossed the placenta into the child. This crossing of hormones aids the maturing of the baby's lungs. It also stimulates the oil glands on the child's skin, eventually giving rise to the baby acne.

Fleshy or red pimples can be present at birth, but typically appear at 3 to 4 weeks of age. They occur predominately on the cheeks, but are also quite common on the forehead and chin. Whiteheads are sometimes present. This condition tends to come and go until the baby is between 4 and 6 months old.

The acne will be most prominent when the baby is hot or fussy, which increases blood flow to the skin, or when its skin is irritated. If its skin comes into contact with cloth laundered in harsh detergents, or becomes wet from saliva or milk that it has spit up, the condition may appear worse for several days.

Gentle cleansing with water alone or a mild soap is usually the best 'treatment' until the baby's acne goes away. Avoid vigorous washing and scrubbing and using moisturizers and other creams and lotions, which can make baby acne worse. Since it looks worse than it makes the baby feel, it is usually best to just leave it alone and understand that it will eventually go away.

Often the baby's skin breaks out into pimples, and while most of the acne is in the form of red rash, whiteheads are also common. While the acne will be most visible on the face, a few pimples may appear on the chest and arms as well. If the child is agitated for some reason, heated up, or unwell, the rash may become more severe, causing further anxiety. Similarly, if the baby's skin is irritated, the rash will worsen. Take care not to wash the child's towels or bibs in harsh detergents, as these may irritate the skin if not carefully and completely washed off. Make it a point to gently clean out saliva or milk from its face, so they do not cause further irritation.

Clean the baby's face with water gently, and use a mild baby soap to wash its face. There is no need to rush around looking for a cure. Baby rash disappears on its own, with time, so applying oils and medications will not help, and are in any case, not required. In fact, applying oils will almost definitely cause the acne to worsen.

Make sure this is indeed acne, and the rash is not just because the baby is allergic to something. If it is thought that the child may have an allergy, keep a lookout for any possible allergens, and keep them away from the baby.

If the baby had tiny bumps on its face at birth that disappeared within two weeks, these are called milia and are unrelated to acne. If the break out looks to have more of a rash or is scaly rather than pimply, or if it appears elsewhere on its body, the baby may have another condition, such as cradle cap or eczema.